Pressemitteilung der Allianz „Save Bees and Farmers“ vom 29.04.2020: „Amid the Covid-19 crisis, European civil society rises to protect public health and the environment from pesticides“ (EN)

We are writing to you as supporters of the European Citizens Initiative Save Bees and Farmers1 which has been already supported by over a quarter of a million EU citizens.

The significant decline of bees and pollinators in Europe and worldwide, together with the wider collapse of biodiversity we are currently witnessing has rightly raised alarm in the scientific community and general public. Experts have declared that “business as usual” cannot remain an option2,3. It is now finally widely accepted that our food production model is a major driver of this ecology collapse, largely because of the massive use of synthetic pesticides it relies upon.

Agroecology is an economically viable and socially just approach to sustainable agriculture and food systems, grounded in ecological and social principles and the integration of science with local and Indigenous knowledge and practice, emphasising farming in harmony with natural cycles and processes, and the political approach of food sovereignty—including the right to produce and access nutritious and culturally appropriate food.

This paper is available in English, German, French, Spanish and Arabic. 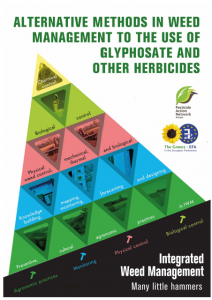 While the use of synthetic pesticides in agriculture might have helped to increase food production, this...
Download

While the use of synthetic pesticides in agriculture might have helped to increase food production, this has not occurred without great costs to human health, the environment and natural resources. The 2017 UN report of the Special Rapporteur on the right to food highlights the adverse impact of pesticide use on human rights, human health (workers, their families, bystanders, residents and consumers) and the environment. The report also reveals that intensive agriculture based on pesticide use has not contributed to reduce world hunger, but rather it has helped to increase the consumption of food and food waste especially in industrialised countries.

April 30, 2018. On May 2, experts from around the world will gather in Rome for a global symposium on soil pollution. The event, organised jointly by several UN agencies, offers an important opportunity to highlight the urgent need to invest in soil health, according to the leaders of Pesticide Action Network (PAN) International.

PAN leaders from all of the network’s regional centers participated in the recent UN Food and Agriculture Organization (FAO) Symposium on Agroecology, and note the important connections between the two events. Specifically, PAN applauds the concept note for the Soil Pollution symposium, which highlights pesticide use as an important cause of soil pollution: “The three major pathways responsible for the introduction of diffuse pollutants into soil are (i) atmospheric deposition, (ii) agricultural inputs, and (iii) flood events. Causes of pollution tend to be dominated by the transport of pollutants by erosion processes (wind and water erosion and sedimentation), and excessive nutrient and pesticide applications, heavy metals, POPs and inorganic pollutants.” (FAO and ITPS, 2015a).

The Global Symposium on Soil Pollution is being organised by FAO’s Global Soil Partnership, along with the Intergovernmental Technical Panel on Soils (ITPS), the Secretariats of the Basel, Rotterdam and Stockholm Conventions, the UN Environment Program and the World Health Organization.

It aims to provide scientific evidence to support action to prevent and reduce soil pollution for increased food safety, food security and nutrition and ecosystem services. It also calls for the restoration of polluted sites, with the first step being implementation of the Voluntary Guidelines for Sustainable Soil Management.

PAN International welcomes the joint initiative, and urges participants to fully recognize the damaging effects of Highly Hazardous Pesticides (HHPs), and calls on those developing the voluntary soil guidelines to include an overall objective of phasing out HHPs and reducing dependency on agricultural pesticides.

“This month marks the 10-year anniversary of release of the UN and World Bank-sponsored International Assessment of Agricultural Knowledge Science & Technology for Development report,” notes Henriette Christensen of PAN Europe. “This pathbreaking report was approved by all participating European, Asian, African and Latin American countries, and called for increased investment in agro-ecological approaches to pest management and action to reduce pesticide dependence.”

“Since the 2015 international year of soils, public awareness has grown about the fundamental importance of healthy soil,” says Dr. Margaret Reeves, senior scientist at PAN North America. “Vibrant, diverse soil biology is a critical driver of soil function — ensuring plant access to nutrients, air and water, and resistance to pests and diseases. There’s a growing body of scientific evidence showing the harmful impacts of petroleum-derived pesticides and fertilizers on this critical soil biology.” (1)

“FAO is working with countries to phase out HHPs, which are defined according to a set of criteria established by the Joint Meeting on Pesticide Management,” adds Sarojeni Rengam of PAN Asia and the Pacific. “In 2015, the 4th International Conference on Chemicals Management recommended that in taking action on HHPs, emphasis should be on promoting agroecologically based approaches. There should therefore be close collaboration between these two areas of work.”

“We must see coordination among international agreements to avoid the continuous contamination of soils with pesticides and other chemicals, and proceed rapidly with the soil remediation,” agrees Javier Souza, the Regional Coordinator for PAN Latin America. “The science of agroecology reminds us that healthy soils are integral to resilient and sustainable agroecosystems — which in turn enable the feeding and development of healthy people.”

Ndéye Maïmouna Diene, PAN Africa’s director, highlights the particular importance of effective decontamination of polluted sites. “Africa is a continent that faces pollution problems due mainly to ongoing use and abuse of extremely dangerous pesticides,” says Diene. “We call for the establishment of policies that preserve the health of our people, our soil and the environment. We are convinced that agroecology is the safest way to fight pollution in the continent.”

“Healthy soils underpin all agricultural production,” adds Keith Tyrell, director of PAN-UK. “Excessive use of agrochemicals is damaging soil quality and undermining our ability to feed ourselves in the long term. We need to switch to more sustainable, agroecological farming systems that conserve and improve soil quality, now.”

In addition, the Third Session of the United Nations Environmental Assembly adopted a resolution in 2017 calling for accelerated collaboration to address and manage soil pollution, The declaration aims to work towards a pollution- free world.’

Note (1):  For instance does a recent EU wide study show that glyphosate persists

Pesticide Action Network (PAN) International is a network of over 600 participating nongovernmental organizations, institutions and individuals in over 90 countries working to replace the use of hazardous pesticides with ecologically sound and socially just alternatives. PAN was founded in 1982 and has five independent, collaborating Regional Centers that implement its projects and campaigns.